This article, by REEM RAHMAN, MICHELA FENECH, NADINE FREEMAN, KRIS HERBST & DANI MATIELO​, originally appeared on Social Innovations Journal, in an issue devoted to articles by Ashoka that paint a rich portrait of how and what it takes for social entrepreneurs, identified by Ashoka as changemakers, to thrive and succeed in rapidly changing contexts. [Original article on the Social Innovations Journal] 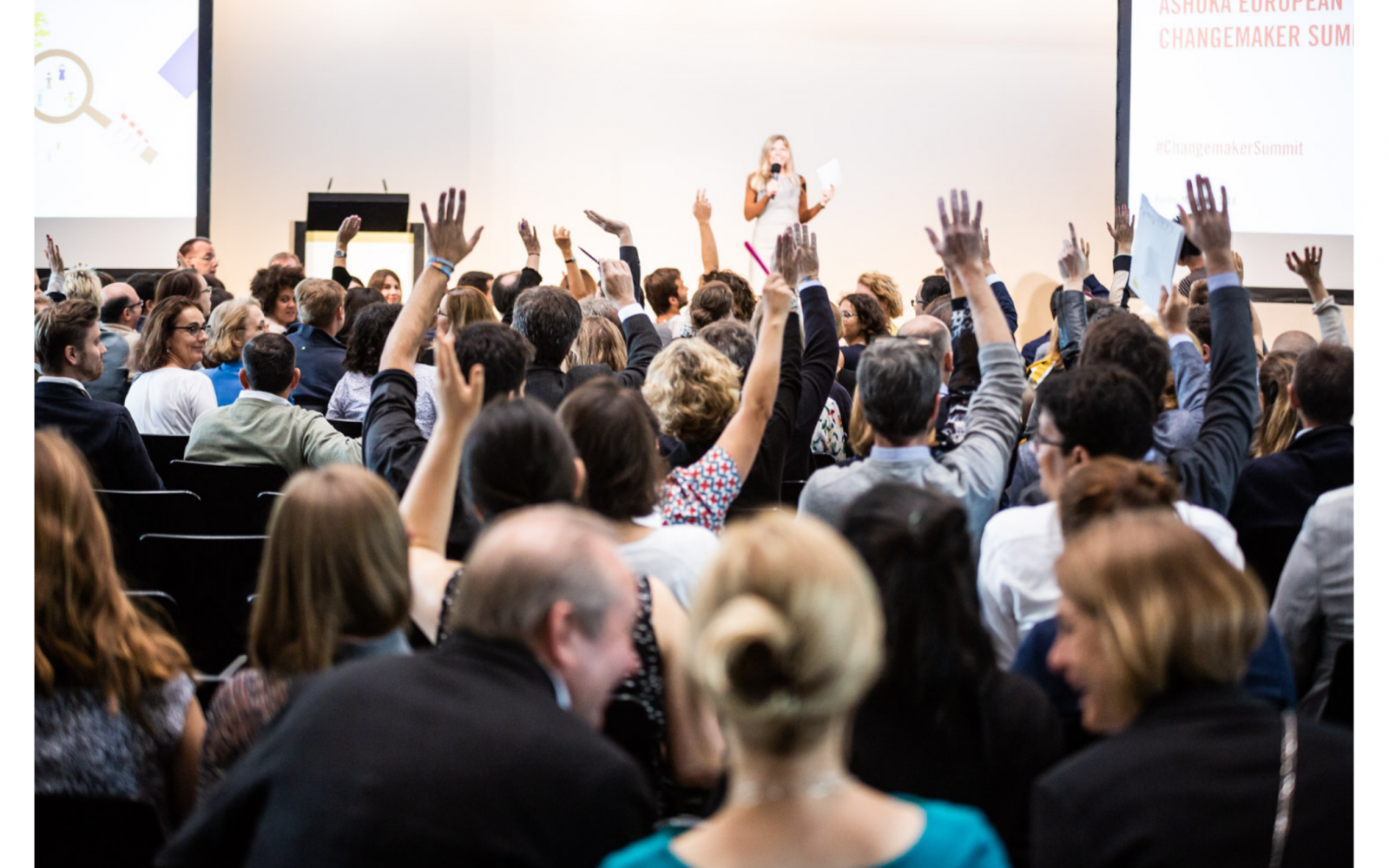 There’s a myth that still needs to be busted.1 It’s the idea that the main way that social change happens is with a hero, that change won’t happen until we have a charismatic leader to show the way. Hollywood understands the power of this idea: stories about superheroes2 are a billion dollar industry, making up almost half of the highest grossing films of 2017. And in the field of social innovation, the majority of conferences and awards are focused on recognizing the lone founder behind initiatives.

There is a certain truth behind this myth. In our work to support transformative ideas for social change at Ashoka, being the individual who is the originator and catalyzing force behind an idea has remained a core criteria for more than 40 years.3 And undoubtedly, social movements are galvanized by inspiring leaders who motivate others to take action.4

Collaboration and Collective Leadership Are Essential for Systems Change

However, Ashoka has observed that leading social entrepreneurs don’t only create impact as lone heroes -- they need others -- and in many different ways. First, they need teams to achieve their impact; Ashoka Fellows are employing an average of 58 team members each. Second, they need to create roles and enabling environments for as many others as possible to also participate and lead in change. Our 2018 Global Fellows Study impact, for example, found that more than 77 percent of Ashoka Fellows are putting young people in charge of leading initiatives. Lastly, they need collaborations beyond their organization in order to achieve impact at scale. More than 90 percent of Ashoka Fellows have reported creating systems change in markets and/or public policy, and creating open collaborations is a widely shared strategy: 90 percent of all Ashoka Fellows are openly encouraging other institutions or groups to replicate their idea in order to achieve their impact rather than solely focusing on growing the size of their organization.

Ashoka Fellows also have a high degree of peer-to-peer collaboration; Fellows average four collaborations with each other. Patrick Streubi of FairTradeUSA and Krishna Mishra of Ekutir are one example. FairTraideUSE and Ekutir have partnered to increase their impact by creating Blooom, a platform to better enable farmers to get fair prices for their produce by selling directly to local and international markets. The collaboration is yielding impact:5 on average, the communities where Blooom works are able to increase their yield by 75 percent, cut their food waste in half, and double their income.

The literature about large-scale collaborations (which covers topics such as collective impact6, multi-stakeholder initiatives,7 community collaboratives,8 inclusive markets,9 and cross-sector collaborations10) cites five major motivations for pursuing a collaborative approach for scaling up social impact despite how much more difficult it can be to coordinate across multiple organizations. Collaborative approaches to systems change are seen as:

There are, however, two major mindset shifts needed in order to take collaborative approaches to systems change. These include:

Opening up and Letting Go

One of the most important considerations for social entrepreneurs who are contemplating collective leadership is determining how much they are willing to open up their model and let go of controlling the full outcome and its execution in order to enable others to also lead, shape, and deliver on achieving a shared vision. This requires questioning and innovating in every dimension of leadership, including organizational structures, decision making, beliefs about people’s capacity, resources and information management, how learning happens, and the role of empathy and conflict resolution.

Raj Jayadev exemplifies14 this shift. He is a part of a growing national movement to advance the concept of “participatory defense” where families and communities most impacted by mass incarceration in the United States can effectively participate in the criminal defense process and transform the landscape of power in the court system. So far, networks of community members have established hubs applying this model in more than four states, and collectively they “have saved nearly 4,000 years of potential prison terms for defendants through cases won or reduced sentences.”15 Raj did not start more chapters of his organization with him at the center as the E.D., but instead uses an open model that works to train and support local cities to start their own chapters, with the community organizations that were already in place, allowing them to make their own decisions. Instead of becoming a large, chapter organization, the hubs form a National Participatory Defense Network. 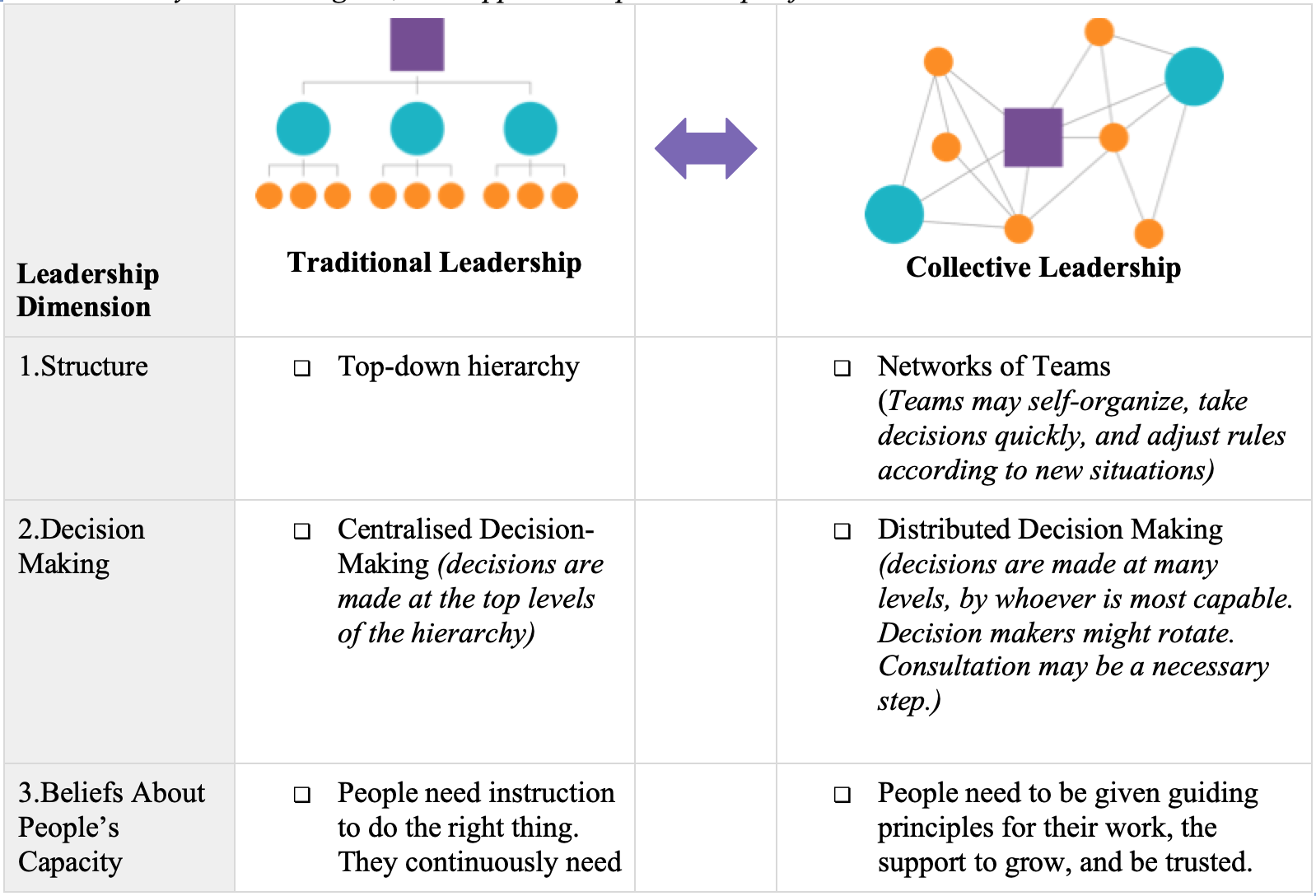 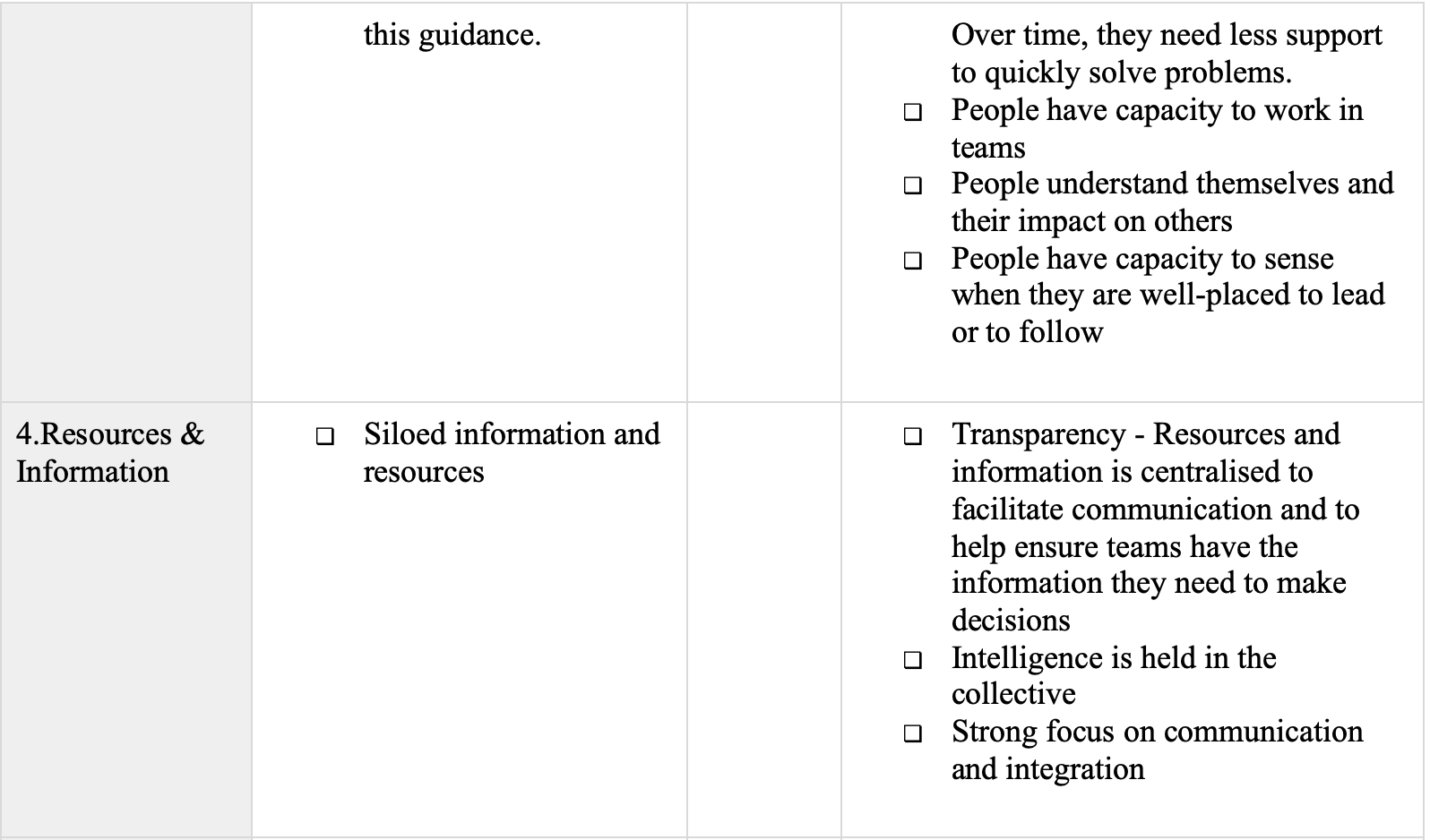 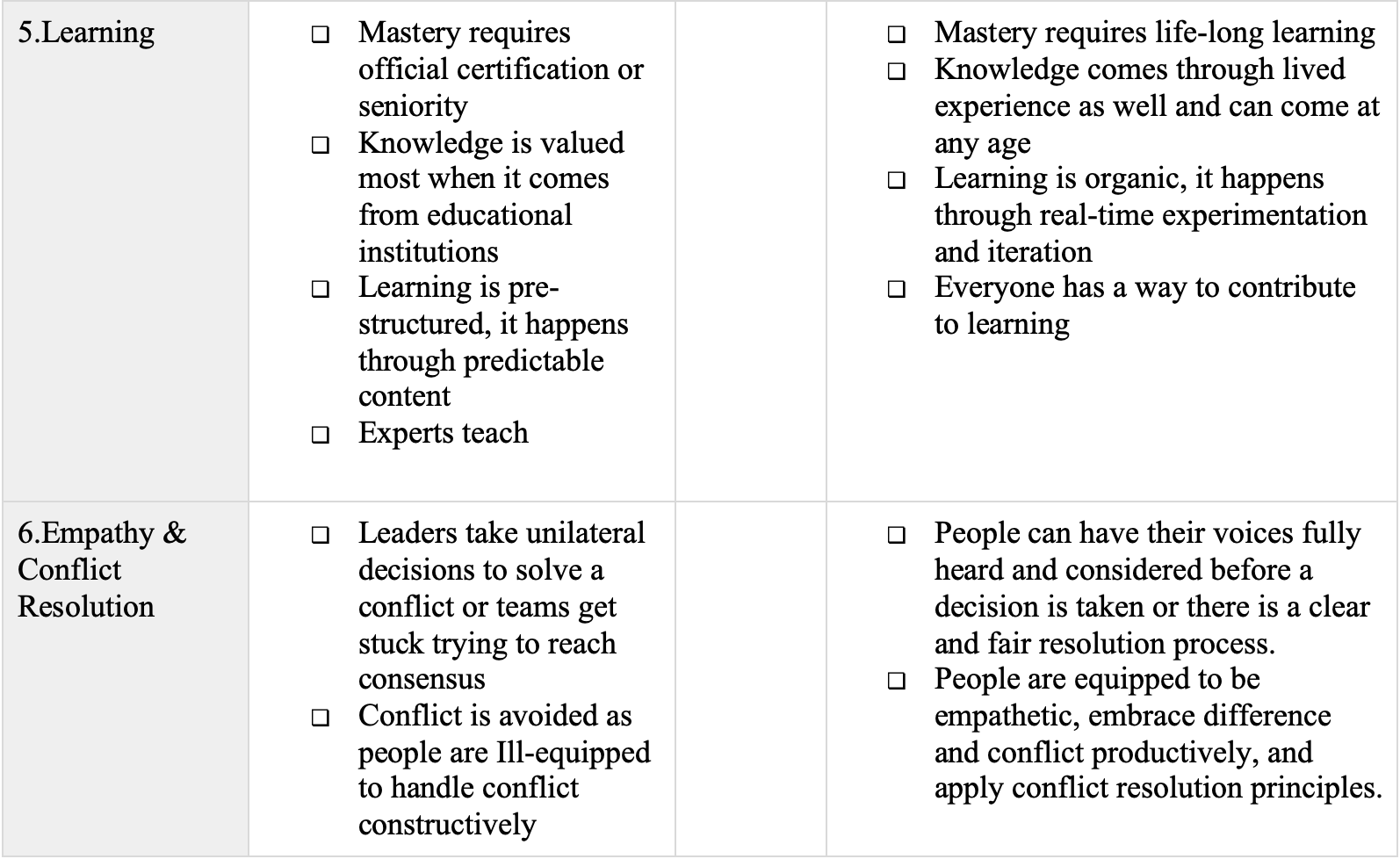 The following is an overview of collective leadership as a way to enable many more participants to quickly collaborate towards systems change. It is offered as a spectrum because it is not binary: no one approach is necessarily “bad” or “good;” the approach depends on specific context.

A more careful look at one of the largest networks of social entrepreneurs shows us the same insight as a more careful viewing of why the Avengers may be one of the most popular of the superhero films: there’s a story more powerful than just the lone hero; collaborations -- and the collective leadership needed to achieve them, are central to the most effective pathways for social change.

3. “Recommend an Ashoka Fellow.” Ashoka | Everyone a Changemaker, 5 Sept. 2018, www.ashoka.org/en/engage/recommend/fellow.

Reem Rahman is the Director of the Ashoka Changemakers Learning Lab, dedicated to helping anyone with an idea for social change succeed in making a difference. She is passionate about co-creating open-source tools for learning and designs products to increase collaboration, impact, and sustainability. These have included reports on trends in social innovation such as "Youth Unstuck: Innovations for Youth Livelihoods and Leadership." Reem has a Master’s degree in Management Research from the University of Oxford focusing on strategy, innovation, and entrepreneurship.